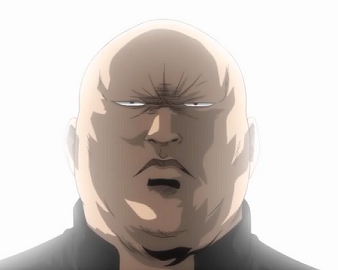 The other characters see him as a reliable person, and is arguably the best fighter of the series. He also claims in one story to be smart enough to get an average above 60 points (presumably out of 100), has been proved to speak English very well, and is a great leader.

Despite loving field trips and excursions, he always sits at the back of the vehicle during travels with a face (similar to the one seen on the right) that disturbs his underlings. This is because of his only weakness, motion sickness.

This weakness is also the main reason that Yutaka is at such an (in his words) idiotic school. He chose to enroll there because it was the closest school to his house. Despite this, he would likely arguably have suffered less at another school, as Cromartie High has far too many field trips in one year compared to other Japanese high schools.

During one of the school's trips, the aeroplane his class was on became highjacked by terrorists. Yutaka then showed what an intimidating effect he could have on others by giving orders to the terrorists that he thought would lead to the trip being cancelled. When this backfired, he ended up in America, and his place in the school was taken by one of the terrorists. Despite this, Masked Takenouchi (as the author calls that terrorist) claims to not know that Yutaka had such a high position among the students. Nobody but Akira Maeda seemed to notice the difference between the terrorist and Yutaka. It is unknown when and how Yutaka managed to come home to Japan, although a few chapters in the manga cover his time there.

Takashi Kamiyama has a tendency to behave in ways that Yutaka absolutely cannot tolerate, and has therefore ended up on the latter's "People to beat to death"-list.

Yutaka's name is the same as a famous Japanese actor's. In the episode of the anime which features the female versions of many of the characters, his first name gets changed to Toyoko.

Ryou Naitou, John Gremillion and Yoshihiro Takayama have been his actors in the anime, the English dub of said anime, and the movie respectively.

Community content is available under CC-BY-SA unless otherwise noted.
Advertisement